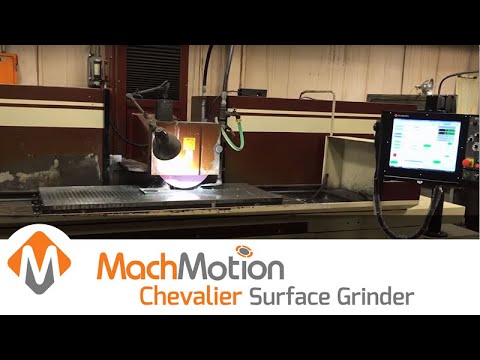 In this article we cover breathing life back into a late 90’s Chevalier FSG-2460TX Surface Grinder for one of the largest electric motor manufactures in the world. We will talk about how the company spent 6 months and countless labor hours invested in trying to fix the machine.

How retrofitting can alleviate all of that stress of old worn out hardware and its unpredictability by replacing it with new components. Many older machines have outlived their warranty and support. You made the right decision buying that machine, lets breathe new life into it. We all want to rest easy knowing our machine is being repaired by people who care and who will be there every step of the way. If you have the pain, MachMotion is the solution.

One of the largest electric motor manufactures in the world approached MachMotion to retrofit one of their Chevalier Surface grinders. The company is in the Fortune 1000 club, with 35 locations, and over 100 employees. The machine had a Fanuc CNC control on a Chevalier FSG-2460TX Surface grinder, a breed from the Late 90’s.

This machine did not show any visible wear on the ways, a prime candidate to retrofit. At her prime, she was used daily repairing dies that are used for stamping out fan motors. The Chevalier FSG-2460TX Surface grinder series features a high-precision, fully automatic, 2-axes + hydraulic table grinder with a PLC controller. The Chevalier is constructed of high-grade, dense cast iron, stress relieved and ribbed to enhance rigidity and increase stability.

*Bonus did you know: MachMotion Offers life time support, remote login service and a one year warranty on all parts.

The machine had been previously out of commission a countless number of times and was steadily becoming unreliable. Over a few years the maintenance department had tried to get the machine up and running dozens of time, sending out components for repair that occasionally took months to get back to only have the machine break down and returned for repairs a week later.

On one of the occasions the Servo drive was sent out for repair to only have it returned having the tuning loop and all of the PID setting wiped out. The Fanuc repair company had replaced the card which cleared out all of the firmware and machine settings. These Servo amplifiers happened to be specifically programmed for that machine, for the motor company and to get these setting back would cost them $14,000. Eventually The Motor company’s Maintenance department was able to flash the firmware, but after a couple weeks the machine failed again and this time it was dead in the water.

All in all, over a 6 months period and after countless labor hours were invested in trying to fix the machine it was time to decide to buy new or retrofit. Management, Operations and Maintenance decided that the mechanics on the machine were in great shape and retrofitting would cost far less than the cost of another repair, and a fraction of the cost for a new machine. They were ready to make the call! Purchase a new machine brings a slew of problems that you might not have thought of before:

• Removal of the old machine
Delivery of the new machine could cause damage to equipment and property. Unloading and loading a 80,000 Ib. machine isn’t a stress free task that you look forward to. Unboxing, Rigging and placing the machine bring a slew of its own problems.

• Properly setting up the new machine
It’s not as easy as buy the machine, having it delivered and powering it on. Most times it will take a good few months to setup the machine to proficiently perform the task. Having a new machine seems like a lot of fun, but after the “honeymoon period” is over its about “getting it done”.

As you can see retrofitting simplifies the process and guaranteed a “in place solution” without the stress and hassle from rigging.

*Bonus did you know: MachMotion has various tools and resources to help support their customers. Rescue Lens, from Logmein, is one of those tools that allow them to offer a better customer support experience. MachMotion’s team ensured they had the right data in the quoting process so they could confidently deliver the correct components needed to successfully complete the retrofit.

MachMotion prides themselves on getting it done right the first time and making sure without a doubt they had the right size motors and drives to make the machine perform properly. MachMotion’s goal was not only to get the machine back up and running as soon as possible, but also to make the machine reliable and perform at its best for years to come.

The system included Yaskawa AC Servos, wiring, a control mount and control unit. The retrofit was shipped to the motor company and MachMotion completed the retrofit on site. MachMotion worked closely with the Operators to evaluate how to optimize production and increase safety. They decided that using Yaskawa servo motors, with mag chucks would facilitate an instant stop to avoid potential injuries.

MachMotion sat down with Maintenance to review the schematics to get the total number of inputs and outputs the machine would need. This allowed MachMotion to integrate to the existing table hydraulics giving them the ability to control the hydraulics using a PLC. MachMotion integrated into all of the hydraulic valves and reprogrammed all of the safety interlocks for the mag chuck. This gives additional safety as the operator cannot start the machine if the mag chuck isn’t engaged, to prevent a part from flying off the table that is not clapped properly.

MachMotion first took out the old Fanuc drivers, then mounted and prewired the back panel. The original machine enclosure had 6 standoffs that the old servo drives could mount to. The enclosure allowed them to remove just a few bolts to install the new back panel which made it extremely easy to adapt to the new hardware.

By the second day motion was ready and the 240 volt AC was plugged in, breathing life back into an old machine. In the end the Chevalier was running like a dream. MachMotion was also able to add features to the machine such as mag chuck safety alarms and homing switches for the hydraulics. Most important a proper conversational operator screen was now integrated. The machine was ready and the company was back in business.

*Bonus did you know: In most cases MachMotion doesn’t need to replace the entire control cabinet, this is a benefit as the back panel is prewired with the motion controllers and drives and makes a seamless retrofit integration. Management was happy about retrofitting over buying a new machine, mainly because rigging cost big bucks as well as management didn’t have to write it out for a proposal. No corporate approval or capital funding was needed. Both of these can take a considerable amount of time and a ton of paper work. By retrofitting they avoided these pit falls.

Maintenance was happy because they know this machine inside and out, and having to spend weeks or sometime months learning about a new machine can cause stress and down time or worst case injury.

The Operators are happy with the new machine because it brought an up-to-date interface that was easy to use and could be change to meet their needs. Additionally the old control had no screen for feedback, just LED numbers. The retrofit gave them a 17″ LCD display with full color, easy to interact and graphical feedback.

In most cases you would have to read the manual and spend a good year getting used to it. With the MachMotion retrofit most of the time there is no learning curve or a thousand page manual, this is because the interface is so descriptive and easy to use. MachMotion was able to do the retrofit at the location of the machine and had it up within a few days.