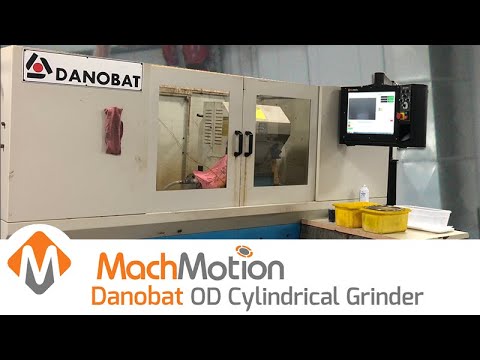 RAM Grinding is a family owned business established in 1993 out of Arvada, Colorado. Their 12,000 sq ft facility offers CNC turning, milling, and O.D, surface, and centerless grinding capabilities. They specialize in the production of high precision parts for industries such as medical, automotive, and aerospace.

What Was the Issue?

RAM Grinding had purchased a Danobat OD grinder that used a Fanuc 210i controller. The Danobat Machine and Fanuc controller had an erratic communication issue that progressively got worse. RAM Grinding suffered with the Danobat and Fanuc issues and tried to make it work for them. The issues had gotten to the point that they had to keep the machine turned on 24/7, because they were worried that if were shut down it would never come back on again. After 7 months RAM Grinding, Fanuc, and Danobat were unable to resolve the issue and searched for a retrofit solution. RAM Grinding couldn’t justify buying a new grinder because of how expensive they were. A new OD grinder can be upwards of $300,000. What Did They do?

Ram Grinding called several retrofit companies that had their own agenda, and were unwilling to fulfill the needs of RAM Grinding. MachMotion on the other hand, listened and delivered on exactly what they wanted. RAM Grinding called MachMotion at the beginning of October and had a complete solution package that was ready to be shipped by the first week of November. What Are the Results?

At Christmas, the company had their two weeks of holiday downtime to perform maintenance activities. This was a prime time to install the new controller! It took RAM Grinding five days to remove the old equipment and install the new MachMotion hardware. Since Danobat had used Fanuc, installing the new Yaskawa motors was simple because the two motors had the same mounting and bolt patterns. The Danobat retrofit was a simple bolt-in-place retrofit solution.

The machine has been running without issues since the retrofit. RAM Grinding now has a reliable machine that they can turn off at night and back on in the morning. In less than four months they have made their money back. RAM Grinding will be using MachMotion for their next CNC machine.