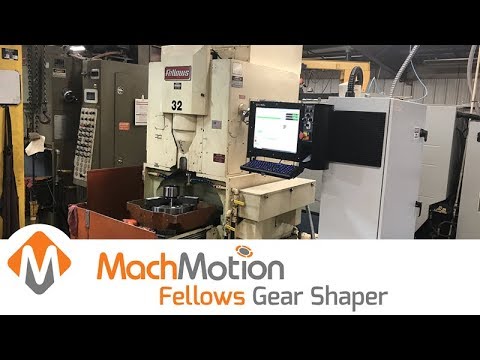 We’ll look at how a large machine shop retrofitted a 1988 Fellows Gear Shaper, and how re-evaluating their conversational program has increased production.

This company uses a 1988 Fellows Gear Shaper with a GE Fanuc controller to produce 5 different parts. The machine cuts out parts by moving a dye up and down while the part rotates around, making three passes to fully cut out the parts.

The parts manufacturing process start with placing the part in to a chuck, then they use a T-handle wrench to tighten it into place. Since they have 5 different part types, they use a conversational program to setup the job.

Wiggling Wires and Kicking the Controller

The 1988 Fellows Gear Shaper has been running nonstop since the 80’s and had developed some erratic behaviors. The Fanuc controller would randomly quit and an alarm would go off. The operator would then need to wiggle wires and kick the controller. Sometimes this would work for a while, but eventually the machine would shut down.

The machine shop knew it was expensive to replace or send out for repairs. If they replaced the controller there would be additional costs to have a programmer develop the custom software needed. The Companies operators of the machine preferred not to learn new software and was comfortable with the current interface, this made it difficult and uncertain as new controller have unfamiliar interface and a learning curve.

The company had additional concerns of how high the learning curve would be or if the software would even run with Fellows Gear Shaper. They had already set aside downtime for the replacement but worried that it could take even more downtime to effectively run the new controller and software.

MachMotion was able to offer the retrofit at half the price of other retrofit solutions and could duplicate their interface and software. MachMotion built a new cabinet and software. They replaced and installed both the old controller and wiring, as well as recreating the conversational programs to be identical to what they had before.

By retrofitting with MachMotion this allowed no transition period since the software ran exactly the same as the old system, with the addition of a few new welcomed enhancements such as allowing for fine tuning to enhance performance, productivity and quality.

MachMotion’s highly trained service technicians came on site for a week to test, train and tweak the new retrofit. Not only was the 1988 Fellows Gear Shaper machine restored to its original condition but MachMotion’s technicians were able to improve on the machines production and performance.

The machine shop reevaluated their conversational program and working with a technician to further improve performance. MachMotion was able to work hand in hand with the company to revitalize their 1988 Fellows Gear Shaper in less than a few weeks.